Seems some things have changed since my last post. Wrong diagnoses for, oh, 9 years. Wrong meds for, oh, 7 years. He really still has no desire to do much of anything fun. Well, that hasn't changed. He turned 12 in July. But that isn't the worst part. Can't really talk about that now. I only have my hunches and no proof yet. Hopefully soon I'll be back. And maybe one of these days, I'll find my sense of humor again.

Posted by Maranda at 2:29 PM No comments:

A Long Summer Ahead

HELP... PLEASE... If anyone bothers to read this, I could use some suggestions. Really.

It's the end of the school year. Last day was today. Monday is report card pickup day. A whole hour left of school.

Elderspawn got home at 3:30 and I'm already getting the ol' I'm bored mom. And, no matter what I suggest, things I plan for the summer nothing is any good to him. I even suggested he attend some camps this summer. Instead, he prefers to argue with me and carry on about how bored he is.

Any suggestions for a near 12 year old boy who expresses very little to no interest in hobbies, sports, music or any type of fun or recreational activities whatsoever? The only thing he cares about are his video games.

Oh, I forgot to mention that he has ADHD, TS, and BPD NOS. It's very difficult to get him to do much of anything and I could really use some ideas on what would be good for him to do this summer.

Posted by Maranda at 2:13 PM No comments:

A Beautiful Day For A Park

Field trip day. We hopped the school buses at the school and headed to the train station in Harvard today. 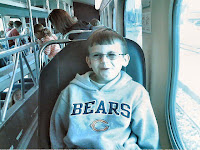 All of the kids thought it was really cool to ride on the top level of the big
Metra Train! They rode the train all the way from Harvard to Crystal Lake. About a 20 minute ride. And they all sat still and in their seats!

They met the buses at the train station in Crystal Lake and reloaded all 4 Kindergarten classes and headed to the Veterans Acre Park. We spent the whole day at the park. Most of the time the kids played on the playground epuiptment. After lunch we took a nice leisurely stroll around the pond, crossed the bridges, up the hills, around the curving bends and landed on the boat launch. Then, they played on the playground some more before it was time to play some games. 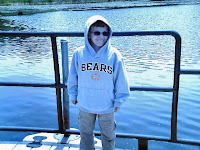 Before they could play games though, all the kids had to roll down the big steep hill to get to the area where the games were at. 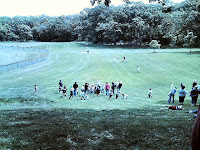 I was about half way down when I snapped the pic so it was bigger than it looks!


First they played duck duck goose, then they played with a really big parachute and last they got to play with bubbles. Then we took a nice leisurely stroll back up that big steep hill so the kids could play on the playground even more!

When it was time to leave, youngerspawn asked me if I could take him to a park when we got home! It simply amazes me how much energy one little six year old has in him! That little boy played hard!

All in all it was a nice, leisurely day at the park for us adults. We got to sit around chit chatting most of the time while the kids played together.

It was also very successful day I might add. No fights broke out, no broken bones occurred, no blood spurted out anywhere, no eyeballs popped out of their sockets, not one single kid took a header into the pond and we returned with as many kids as we left with!

And all the kids had a blast together!

Posted by Maranda at 3:09 PM No comments:

In a couple of weeks, youngerspawn gets to ride on a train and go to a park to play and have activites for his fieldtrip. This time I get to chaperone and plan on going with him. They didn't take any chaperone's on Elderspawn's fieldtrip. Bummer. I really would have liked to gone to Medeival Times again. It's been years since the first time I was there.

Hopefully it won't rain the day of the fieldtrip. YS is really looking forward to riding on a train for the first time!

ES and all of the other 6th graders from his school got to go on a fieldtrip to Medieval Times.

This morning I had told him about the show that they put on there such as jousting on horseback, sword fighting, etc.

Now, having gone to many reinactments with his dad, I figured this would be something he would really enjoy.

Yeah, not so much. Seems that they no longer include a beverage with the meal that was $21.00, a reduced rate because they had a fundraiser for this trip. You have to pay for the drinks seperately. Mom didn't know this, didn't send money with him and he ended up having to drink a bottle of water instead.

The announcer was way too loud for his taste. He said he was screaming over the microphone. But you have to be loud for everyone in the audience to hear you, right?

As for the show, well it wasn't "educational" enough for him. I had told him this morning that it was just a show and it was for fun.

Welp, so much for Medeival Times and Elderspawn! Next.

Updates On The Spawn

Youngerspawn ended up getting glasses. Seems he's far sighted, has astigmatism and his right eye is turning inward. His distance vision is 20/100 in his right eye and 20/200 in his left. Worse than I had thought. He got his glasses with transitioning lenses however they aren't dark enough for him when he goes outside so I have to take him back in and have more tinting put in them and have them readjusted because he says they hurt the back of his ear.

Youngerspawn, who still has all baby teeth, has 3 cavities on the left side and has to have them filled. Why, I don't know, but they're going to fill his baby teeth.

Elderspawn, who has many permanent teeth, has 4 cavities, 2 on each side, all in permanent teeth. One is so bad it's down to the nerve and he may have to have a root canal. Bad news - insurance doesn't cover root canals. They only cover exams, cleanings, fillings and extractions.

Lovely, just freakin' lovely. I really don't want to have to have it yanked out. It's one of his back teeth. He needs them.

Oh, and Elderspawn still has one of the cavity filled baby teeth that hasn't fallen out yet. That may have to be yanked out as well.

I just hope the whole ordeal of having to have shots of novacaine, teeth drilled out, filled, extractions or a possible root canal will teach the two of them to take better care of their teeth. Neither one of them believe me when I tell them that their teeth are going to rot out of their jaws if they don't brush them regularly.

Why won't kids listen to their parents!!??!!

Beauty Tip Of The Day. I like it alot.

"All life is beautiful.
All humans are beautiful.
Only behavior makes one ugly."
Jeffrey C. Keene II

Posted by Maranda at 8:25 PM No comments: